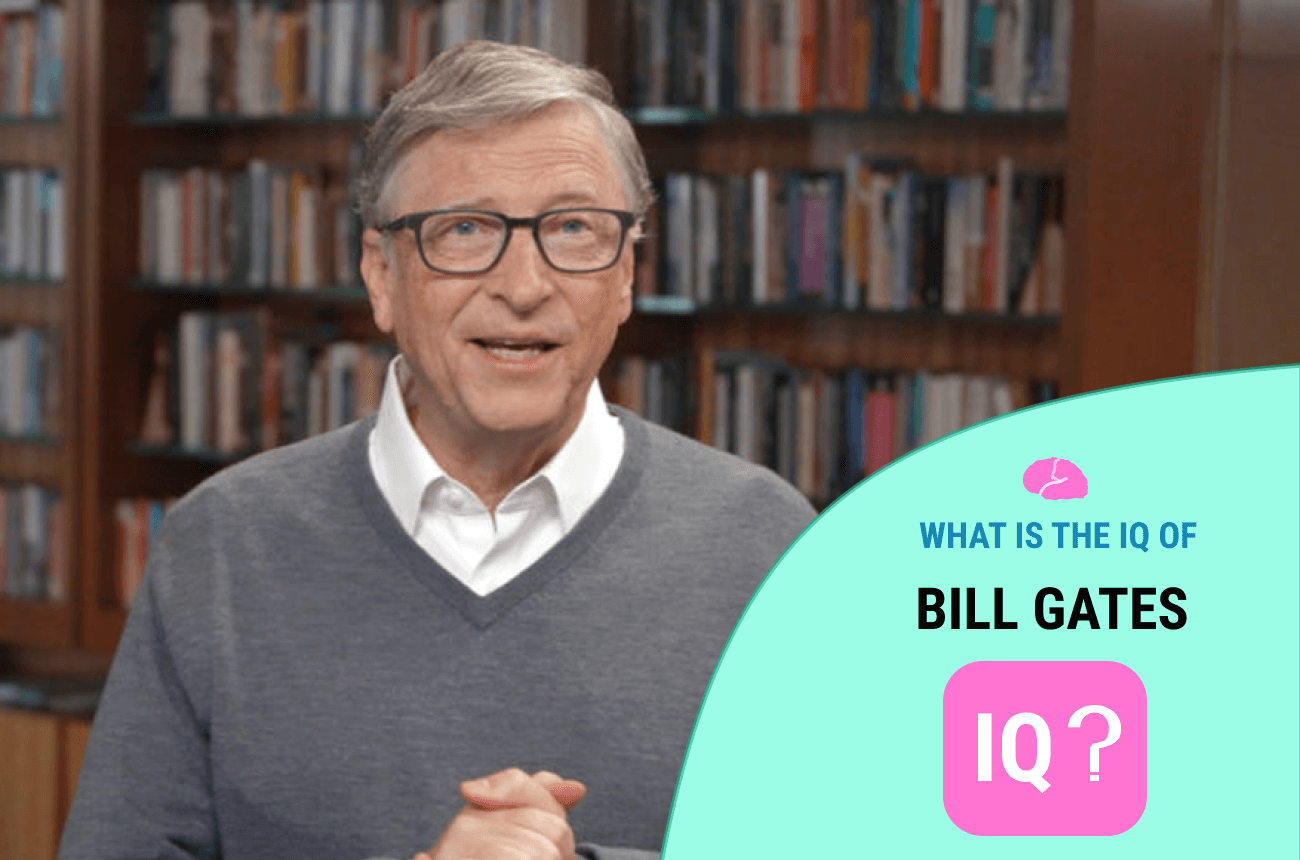 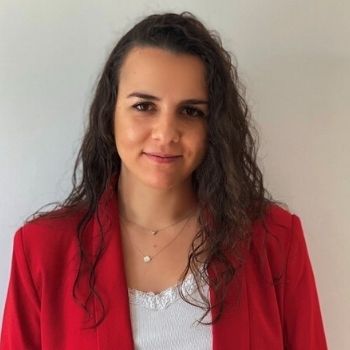 On Bill Gates' IQ and EQ

Called the 'impatient optimist' by writer Lisa Rogak, Bill Gates has become famous for co-founding Microsoft and becoming immensely rich. But also now by his relevant charity work. Not much information is available about Bill Gates' IQ and EQ, as no test results he may have performed have ever been published. However, we will make a good prediction of his emotional and general intelligence levels, based on his personal and professional life and background.

A ‘happy boy’ and a bright teenager

To understand the background of this incredible mind, we must start at the beginning. Bill Gates was born in 1955, in the city of Seattle (USA). He studied at Lakeside, the private school where he had his first contact with a computer. At this time, Gates already had a keen interest in computer science, something that increased when he arrived at Harvard University. It was between lessons that he started developing the outlines of Microsoft, the software company that marked a before and after in the computer industry.

As a kid, he was always smiling, so he was given the nickname “happy boy”. But he was not only happy. As we can see in the Netflix documentary ‘Inside Bill's Brain: Decoding Bill Gates’, Bill himself admits that he realized he was smarter than the other kids at school with recordings that dictated sums quickly. "My head was going really fast," he claims. In eighth grade, he took a Math test and had the best grade in the entire state: they could already glimpse the child prodigy he was growing up to be. As for his relational character, he was an introverted, conscientious child who used to seclude himself in his room for days just to read and study.

Bill was a stubborn guy, focused on his own things, obsessed with learning. His mother, Mary Maxwell Gates, was very involved in keeping her son interested in everything, and the one who passed on to Bill her emotional intelligence. Bill’s intelligence was above the limits of any teenager, but his ability to socialize was not the best: Mary was, again, the one who forced him to go out into the world and socialize, something that certainly paid off, as Gates has had to face the public eye. These communication skills he has developed throughout his career fed his IQ and EQ in a significant way.

The greatest achievement by Bill is his success with Microsoft’s software. He and his school friend Paul Allen, whom he had met at Lakeside, created the project to develop software for an early computer. As the company still explains on its website, the pair first agreed on providing an operating system for IBM's first personal computer and, five years later, it officially launched Windows. What had started as a teenager game became the largest company in the world.

Gates left Microsoft in 2008 to devote his efforts to other charitable causes and his intellectual curiosity. He is still one of those guys who carry a compendium of books everywhere he goes: he's happy to learn about things in depth. So says his Microsoft colleague, Mike Slade: "He almost always knows more than the person he's talking to, whatever it is."

Mike is not the only witness to Bill's capabilities. His friend Bernie Noe dared to estimate Bill’s retention level: “90%, no less”. And also his wife Melinda -now ex-wife since he announced their divorce in 2021- claimed that Bill is a multiprocessor man: he reads and processes at the same time. This capacity for retention and processing might come naturally, but if we go back to his adolescence, it is possible that all those hours of reading served Bill as training for his own brain without him even realizing it.

About his beliefs and concerns

To learn more about his emotional intelligence, it is important to dig into his belief system. What is Bill Gates concerned about? What are his opinions?

Let's start with the basics. Bill presents the interests of any American: burgers, dogs, tennis... Nothing surprising, until he is asked about his biggest fear: "It is that one day my brain will stop working." And the truth is that Bill seems to have always been aware of his potential and all that his brain has contributed to contemporary society.

Bill has always signified himself as an agnostic person but, in an interview he gave to Rolling Stone magazine in 2014, he assured that he had raised his children in religious values.

In his personal blog, GatesNotes, he has advocated the incorporation of nuclear power in order to reduce climate change, and he even wrote a blog post as a claim to the COP26 climate conference defending the rights of poor populations. That’s something only a confident leader would do.

But these are not the only topics he has discussed publicly. Gates has also spoken out on some of the social issues that have concerned American society in recent years. In 2020, amid the atmosphere of police abuse of the black community in America, Bill Gates wrote a tweet showing his support for the #BlackLivesMatter movement.

As we have seen, it is true that Bill Gates' views -at least the ones he expresses- are not too unpopular. Still, the fact that he has publicly come out in favor of or against some controversial issues reflects his ability to overcome criticism, which gives us a clue about his EQ rating.

In 2012, Bill and his wife Melinda co-created the Bill & Melinda Gates Foundation with the aim to fight HIV, empower through education, support vaccine developments and other important issues. According to CNN, Bill donated to the foundation more than 20 billion to fight COVID-19 and help in the Ukraine war.

As told in the documentary, Bill became frustrated with the lack of sanitary and sewage systems in poor countries, what was leading to many diseases and high mortality. Despite hard work with different governments and companies to redesign the systems, he ultimately gave up on them. So he created a competition to create the most innovative septic system with a $7 million dollars award.

In this sense, Gates finds a problem that no one is solving and decides to invest in sanitation. As a good observer, he goes where no one else is going: providing clean water instead of computers. Playing on the ambition of companies and young engineers, he got the world interested in his idea of sanitizing sewage, a display of emotional intelligence when it came to negotiating and persuading to achieve his goal. This may be something he uses to improve his public image, and a display of his intellectual brilliance.

Bill Gates clearly uses his full potential to achieve what he wants, whether it is for himself or for others. From what we have reviewed, he is a man who has been able to seize his resources and get a place among the great pioneers of history, demonstrating a level of general intelligence well above average from a young age. We must also emphasize his EQ, based on his sensitivity to social issues and persuasive power. According to Bill Gates’ life history and abilities, we can say that he is at least in the top 1% in IQ. We predict that his IQ will be around 150. 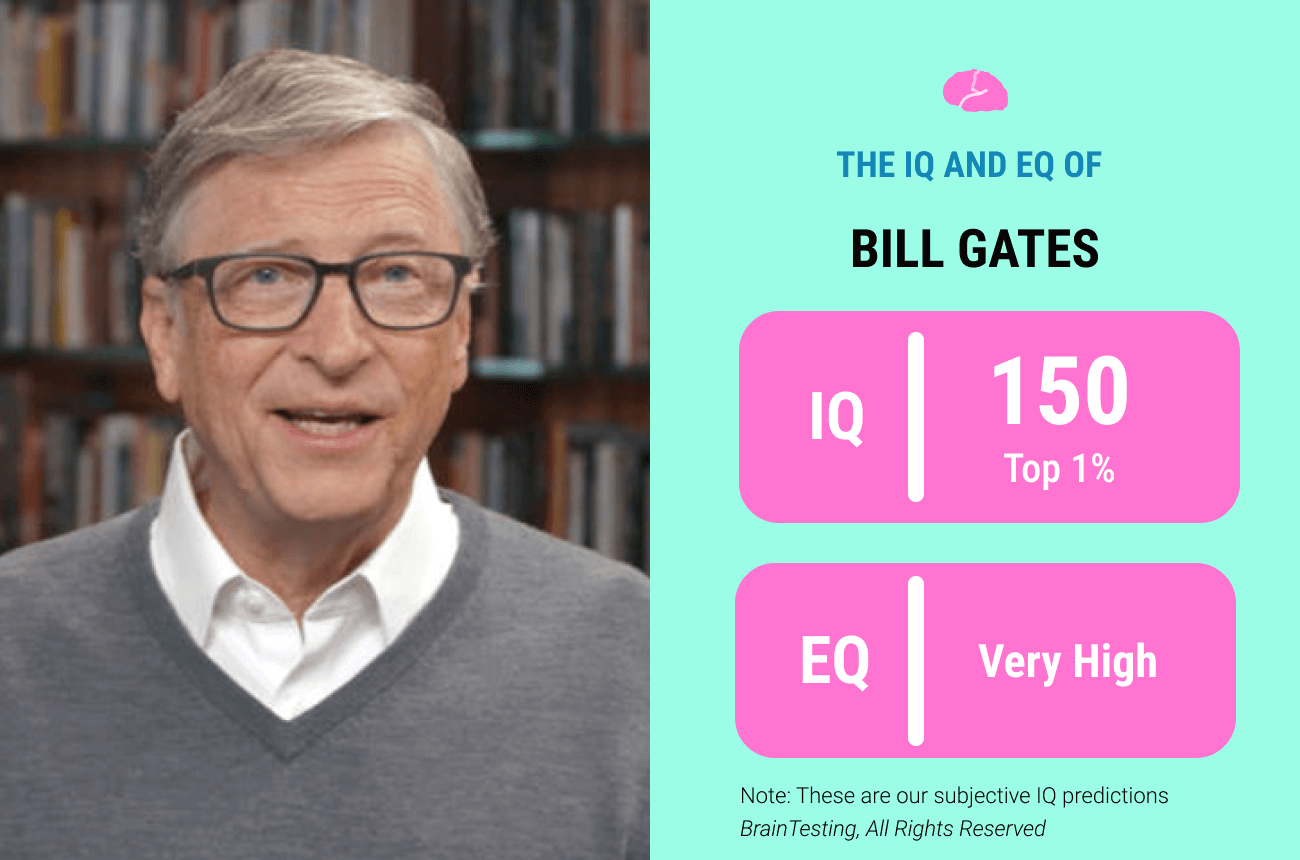 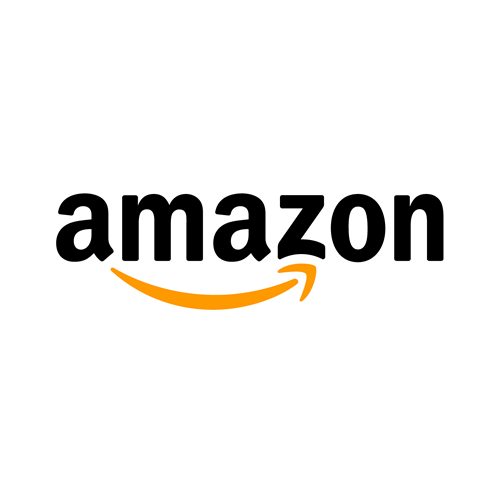 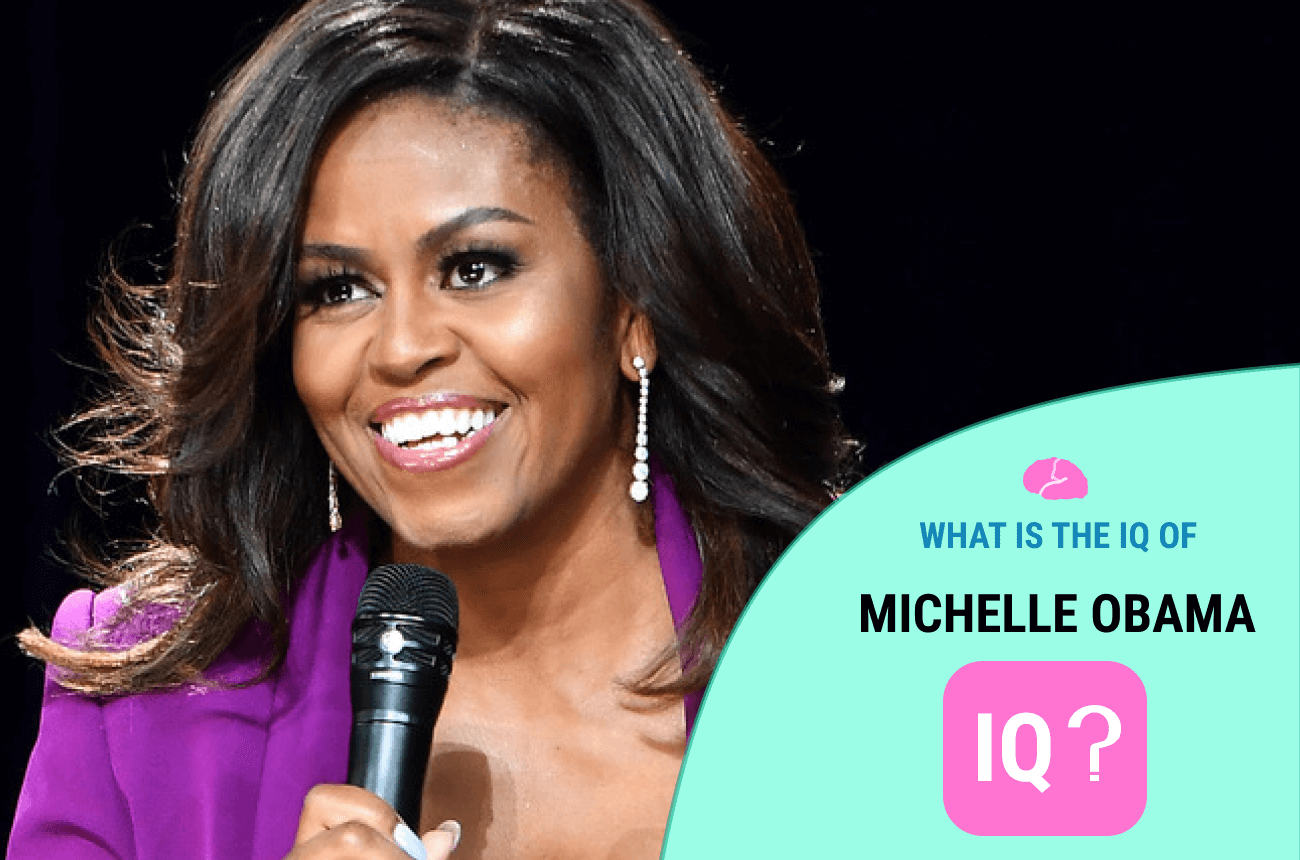 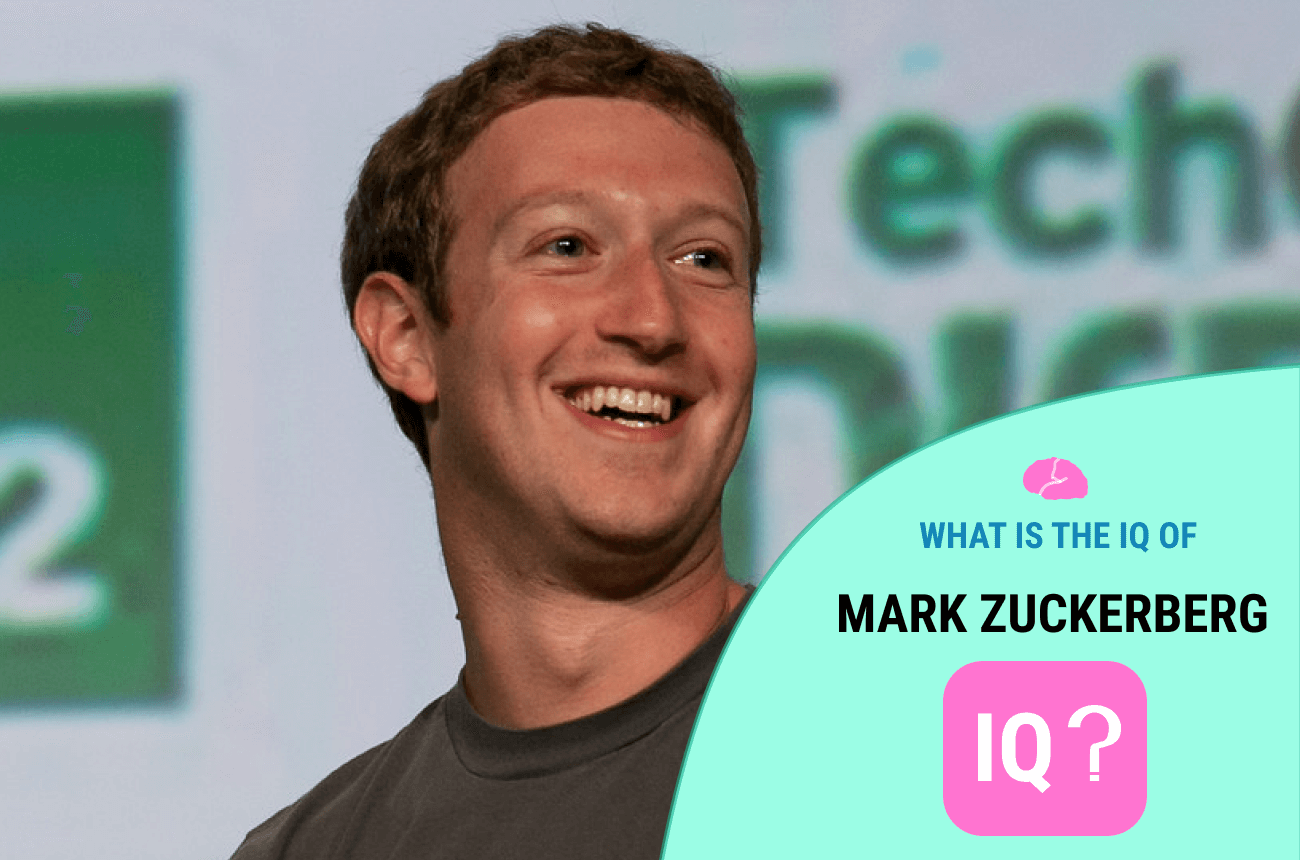